The Weaver’s Cottage is the building we will discuss in this article. It’s a building that to some seems out of place between a modern Health Hub and a converted cotton mill.

Have you ever wondered what the weaver’s cottage was? 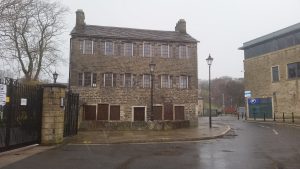 The Cottage can be found on Bacup road between Ilex Mill and Rawtenstall’s Health Hub; this cottage would have been common during the time it was built.

Many people have seen this building but they don’t know anything about it or its history.

What was the cottage originally used for?

The cottage name tells us that the main use was for Wool and/or silk weaving. Though known as the Weaver cottage, the main purpose of this building was the housing of the large loom machines, locally it could have been known as the loom shop.

Weaving was a trade common among the working people. Therefore the cottage work area’s were available to all the weavers in the province.

It seems like the designer had taken in the risks of this profession when they had planned this building. A good building design is necessary for specialised work.

You can see this in the used of windows so that the natural lighting would reduce the number of candles needed in the room, this will minimise the risk of possible fire. A fire was a major worry in the weaving business, just one spark could lose your livelihood and your home.

Some weavers employed their own or local children to assist with the weaving process as children could easily reach more difficult areas on the loom.

Until the introduction of the powered loom, this cottage would have been in constant use.

At the height of the industrial revolution, work in the mills was encouraged. With mills able to produce large quantities of fabric it became harder for those who worked in these cottages to earn a living.

As a result, the weaving profession began to be abandoned and more people began to work in the large cotton mills. Some of these mills can be found around Rawtenstall today, one is the Ilex mill next to the weavers cottage.

English weaving is a traditional skill among those in decline.

Resulting in the cottage workshop being left vacant, the large space was partitioned off to create homes. But, as more desirable homes were built, the weaver’s cottage again was empty.

Just outside The weavers cottage was the location of the first murder in Rossendale’s living history. The shocking murder of Nancy Chadwick in 1948. Find out more Click here.

In the 1970’s the area was under an urban renewal.

The Rawtenstall Civics Society saved the cottage from being completely demolished. Unfortunately, the rear sloped roof was lost.

The civic society was able to restore the cottage to as much of its original format. Now using it as a heritage centre for the local area.

The cottage became a grade II listed building registered on the 16th October 1970. This gives the weavers cottage the status of a building of national importance and special interest.

To find out more visit The Rossendale Civic Trust’s website.

If you would like to learn more about historic building why don’t you check out our course page and see what we can do for you!

There is a video provided by the Rossendale civic trust marking the history of the weavers’ cottage.